Back to all posts

How to Write Epic EDM Bass Drops in 7 Steps

Today on 3-Minute Theory: How to write an epic EDM bass drop in 7 steps!

If you’re an EDM producer, there’s nothing worse than giving your audience an epic build on the snare drum, then following that with a bass drop that consist of one note. No! Your audience deserves better, so let’s do this...

But first, click the cube pic below if you want to download the PDF bundle for this lesson, which includes: 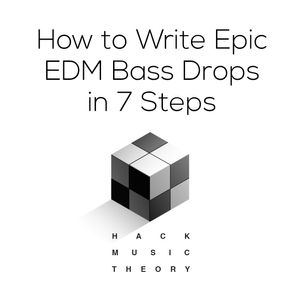 Alright, so we’re at 90 bpm, which is a mega groovy tempo and one of my favourites. Bass drops are all about bass and drums, so we’ve got those tracks set up and ready to go. We’re gonna do a two-bar (AKA two-measure) bass drop, so it doesn’t get boring.

We’re gonna start with the drums, so let’s get the snare in on the back beats, which are beats 2 and 4 of each bar. Then we’re gonna get the kick in on beat 1 of both bars. This is James Brown’s “the one” technique, where the rhythm section (i.e. bass & drums) locks in on the 1st beat of every bar, but then they can do whatever they want for the rest of each bar. This method keeps the groove going and makes it danceable, too. Next, we put in the hi-hats on every quarter note, except in the beginning of the 2nd bar, where we spice it up by adding a hi-hat on the 1+ (pronounced “one and”), which gives the pattern some movement. On that note (excuse the pun), eighth notes are counted as: 1 + 2 + 3 + 4 +.

Now, this is the important bit, we’re gonna do some syncopation on the kick. We’re gonna add in a kick drum on the 2+, which gives it a funky syncopated groove. Then in the second bar we’ll do the same thing, i.e. a kick on the 2+, but this time with an extra syncopated kick just before it, on the 2e (pronounced “two ee”, and represents the very next sixteenth note after beat 2). Also, let’s add a kick on the 3+, which will give extra momentum into the very last snare drum. By the way, sixteenth notes are counted as: 1 e + a 2 e + a 3 e + a 4 e + a. Drums are done!

Figure 1: Drum pattern for our bass drop, where C2 is the kick, E2 is the snare, and G♯2 is the hi-hat

This is the starting point for our bass line. After this, we just move these “kick notes” to other notes in the scale. I’m hearing the last three notes being that funky trio of notes I’m always talking about (i.e. 1, ♭3, ♭7), which is a characteristic element of funk and many other genre’s groovy bass lines. We should keep those notes on “the one” in both bars on F♯ (the root note) for extra punch. Then let’s move the other bass note in bar one (on beat 2+) up to A, i.e. the ♭3.

Now we literally just fill in the gaps, so let’s start from the beginning. We can go up from the root to the ♭5, then up to the 5, down to the 4, back up to the ♭5 again, and end this little run on the ♭3. This is a great little motif that makes the most of the blues scale, and its “blue note” (i.e. the ♭5). When writing for bass, before we get to the fancy synth sounds, we want to be totally focused on writing a great melody, and part of this is hunting for great motifs to repeat. Reusing a great motif will create both familiarity and structure to your melody, while also making it catchy. So, let’s repeat that exact motif (♭5→5→4→♭5→♭3), starting on beat 3+ this time. But, you see those last three notes of that motif that are now over beat 4, let’s do some magic on ‘em!

Change the MIDI grid to eighth notes triplets, because every good bass drop needs some “wub wub wub” triplets, right? So, we’re gonna adjust their timing to fit the triplet grid, and now we have that same 4→♭5→♭3 (i.e. B→C→A) motif repeated, but in triplets the second time around, which gives the illusion of the bass line slowing down. Wub wub wub!!!

Figure 5: The 4→♭5→♭3 motif repeated as triplets the second time around (please note, this grid is in triplets)

Put the MIDI grid back to ‘sixteenth’ and ‘straight’, and we’re ready for the second half of our bass drop. From the root on “the one” of our second bar, let’s go up to the ♭5 again, like we did in the beginning, but a sixteenth note later this time, for variation (too much repetition gets boring real quick, so use your second bar to write a melody that flows from the first bar, but is completely fresh and alive with variation). Also, this gives us a really cool descending line ♭5→♭3→1, then we can do a little sequence of that starting on the ♭3, so we get ♭3→1→♭7. We’re now at the lowest part of the melody (i.e. E), so let’s climb our way up again, by reversing the ♭5→♭3→1 motif, which gives us 1→♭3→♭5. Finally, I’m just going to return to the first bar, and add a ♭3 in between those two repeated motifs for variation and extra flow, and we’re done!

Figure 6: Final bass line, before separating it out onto different tracks with different synths

Now that we have a great melody, it’s time to add some sonic sugar in the way of tasty synths. So have some fun chopping this bass line up into segments, and spreading ‘em out over a bunch of different tracks with a bunch of different synth sounds, and you get this (listen at 3:36 in Video/Podcast):

Wooohooo!!! You're a mere 30 minutes away from being even smarter than you already are. Just head over to your inbox now for your free download.